The annual Royal Horticultural Society’s (RHS) Chelsea Flower Show has run for more than a century and a half and attracts visitors from all over the globe. Such is its prestigious reputation that it catapults exhibitors on the worldwide stage and is seen as a leading source of inspiration for new garden ideas. 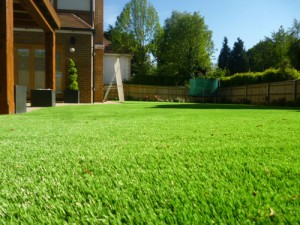 For fake grass installers in London and elsewhere in the country, history was made in 2009 when artificial turf products appeared at the Chelsea Flower show for the first time. This helped plunge synthetic grass under the spotlight as it demonstrated the products’ quality, flexibility in design, and how imitation lawns are now considered a suitable alternative to ‘natural’ grass.

In this article Dayco looks at the history of artificial grass at the flower show over the last five years.

Imitation grass has been around for more than 50 years, but has rocketed in popularity in recent times. This can be attributed to a number of reasons, including a rise in the number of homes with smaller gardens, and the changing lifestyle of householders, where rising work pressures have had a knock-on effect on the time spent in our gardens. It has become an inspiring choice for roof gardens and terraces, and is perfect in built-up areas where gardens get very little sunlight.

2009 – Artificial grass was used for the first time at the show to create a contemporary garden full of greenery including hornbeam trees, boxed hedging, decorative straight lines and an impressive stainless steel wall fountain feature. The grass was well received by visitors and it showed just what could be achieved.

2010 – Imitation grass hit the headlines again as it was used in an exhibit called the Urban Plantaholics Kitchen Garden, an eccentric’s garden designed by Tony Smith who used artificial grass as a surface material in a grotto. It showcased the fact that fake grass is a practical alternative in places where grass won’t grow.

2012 – Fake turf was back as cutting edge designer Tony Smith scooped the gold medal and Best Fresh Garden award for his forward-thinking exhibit called ‘Green with…’ exploring the emotions of envy and desire. It was an innovative design that combined nature with art and contained a green Perspex wall, suggestive of a prison or a cage, containing artificial grass in stark contrast to the meadow in front of it.

2013 – Synthetic lawns came under the media spotlight once again as a wide range of realistic artificial grasses were on display. It showed how this type of surface could be a suitable option for UK homes and businesses, and in long hot summers it is one way to get round the hosepipe ban.

2015 – Garden designer and artist Tony Smith exhibited with synthetic turf again in combination with John Lewis outdoor furniture, much to the delight of fake grass installers in London and elsewhere in the country.

Although debate over fake grass verses natural grass is still going strong, statistics show that more and more people are seeing the benefits of their product for their own gardens. Figures reveal that imitation grass sales are growing by as much as 40 per cent each year, and its realistic appearance, low maintenance, and versatility means that its popularity is likely to continue for many years to come.